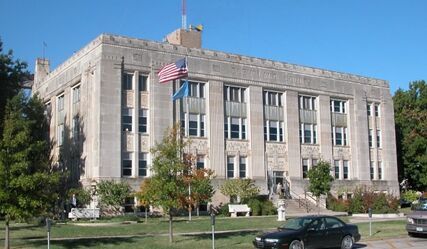 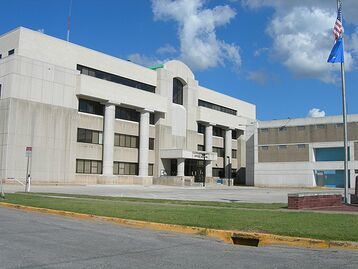 This is the Cleveland County District Court where Cleveland County residents get family law matters and other civil matters adjudicated and where felonies and misdemeanors alleged to have been committed with Cleveland County (including Norman, Moore, Noble and Lexington) are litigated. It is located at 201 S. Peters, Norman, Oklahoma 73069.

The public entrances on the East and West Sides are secured by Deputies from the Cleveland County Sheriff's Office and include metal detectors. All persons are subject to search. Persons without entrance badges must place their belts and all metal objects on a tray for scanning. Any prohibited items found during scanning or search must be taken back to one's vehicle or permanently surrendered to the Cleveland County Sheriff's Office for destruction. Entrance usually doesn't take long, but entrants are advised to arrive a little early; usually ten minutes prior to court is adequate to be in court on time before the judges call their dockets.

Out of Custody Arraignments

Every Thursday and Friday people who know they have been charged with a crime but who have not been arrested or who were released from jail with an order to sign up for arraignment at the Cleveland County Courthouse can sign up to be arraigned that day. When they sign up they will be told which judge to appear before at 1:20 pm. In the proper courtroom they will sign in if they appear without an attorney and will usually be given a personal recognizance bond request form to fill out if they have not already posted a cash bond for their bail. At the hearing each person's bond will be reviewed and confirmed and they will receive their next court date. People who have warrants for their arrest and who post a cash or personal recognizance bond will have their warrants recalled after they have completed this hearing and taken the paperwork to the Cleveland County Detention Center.

People who have not been arrested yet should not appear without counsel unless they have already arranged for a bondsman to appear and post their bond.

Thank you for contacting me. I will get back to you shortly.

Please complete all required fields below.